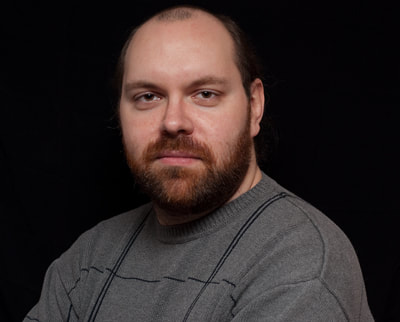 This picture is wrong. Adam has long hair, wears glasses, and has gray in his beard. The balding, however, is accurate.
Adam spent his first years alive believing the deliberate lie that his mother was his sister.
​He never met his dad.
He spent his adolescent years feeling an urge to cut off his hand every time he saw a paper cutter at school.
He spent hours hunting for demons in his grandparents' basement and saw angels in the clouds.
Richard Dawkins' The God Delusion saved his life.
He's an atheist now, but he doesn't mind if you're not. 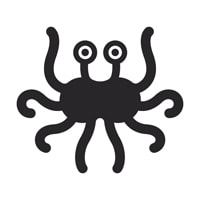 Growing up he read a ton of Stephen King, including Tommyknockers in 5th grade, which earned him some sidelong glances from teachers. His favorite King books are Cell, Misery, and Hearts in Atlantis. Cujo ripped his heart out. He hasn't read The Stand or The Shining.

His aunt introduced him to ​The Chronicles of Thomas Covenant by Stephen R. Donaldson. That and its sequel trilogy were utterly formative, his favorite fantasy novels hands-down. But he also loves Wheel of Time, Earthsea​, The Broken Earth, and A Song of Ice and Fire (and yes, he liked it before it was cool).

He used to love Welcome to Nightvale until Joseph Fink blocked him on Twitter for defending Democrats. 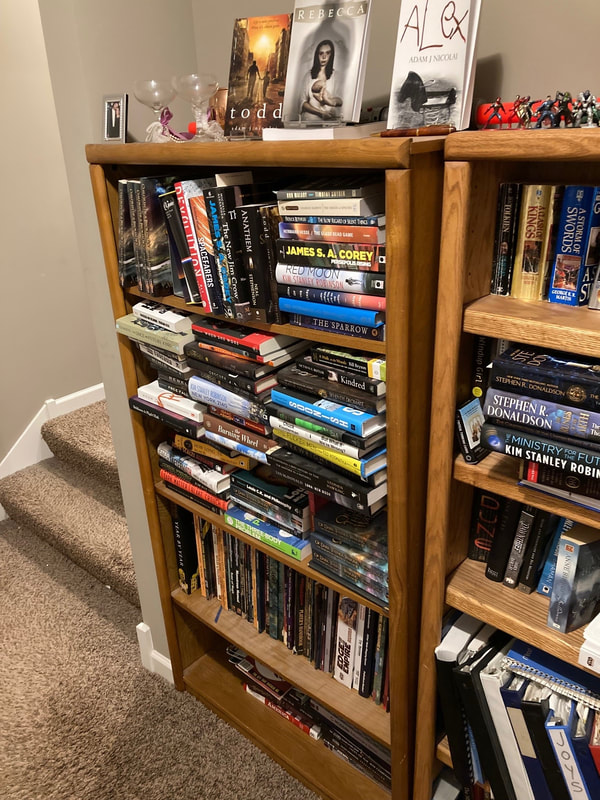 Photo authenticity proven by the sheer volume of books.
He's also into music, biking, tabletop role-playing games, modern board games, and video games. Especially video games. If this whole writing thing doesn't work out he still may fall back on that. He taught himself C++, Lua, Java, and a couple other languages, but never really seemed to grok HTML. He wrote a text adventure called Legends of the Great Deletion back in the 90's with a good friend of his and an intricate DKP-management addon for WoW. He's been running D&D games for over 25 years.

He wrote his first book in elementary school. It was a Choose-Your-Own-Adventure. Wrote two more in high school (but they were class assignments, so they don't really count), along with a mountain of short stories, poems, and abortive first chapters. Next to that mountain was a second, this one comprised of game design documents: maps, mechanics, flavor text,  and whole notebooks full of Magic cards, some of which he predicted decades before they were printed. Take a look. 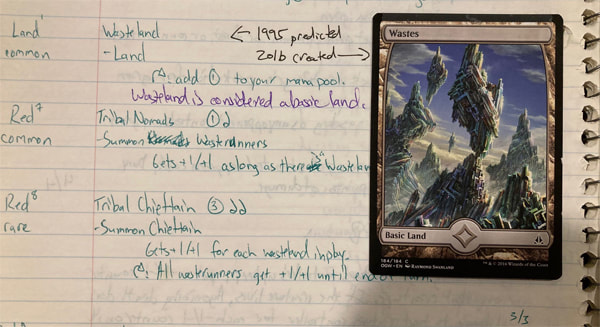 ​He's picked up a lot of skills. He worked at an insurance company for 13 years as a trainer, project manager, sometimes-tech-writer, frequent editor, and early on, of course, as a call rep. In addition to Lone Road, he runs a family business selling a product his grandfather invented in the 80's. When Trump got elected he and his wife woke the hell up and joined the local Democrats, working their asses off to get Jason Lewis kicked out of the House of Representatives—successfully.

But one skill that eludes him is cover design. 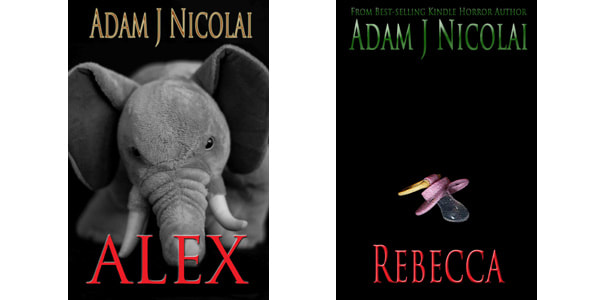 Don't make your own covers, kids.
(Luckily, Kit Foster was a lot better at it, producing the actual Alex, Todd, and Rebecca covers.)

He is married to a beautiful, brilliant, passionate Black woman. Their kids were born in 2006 and 2008, triggering an avalanche of love and existential terror which consumes him to this day. His family is his world.

He's written six novels. You will hear more from him.
Return to top